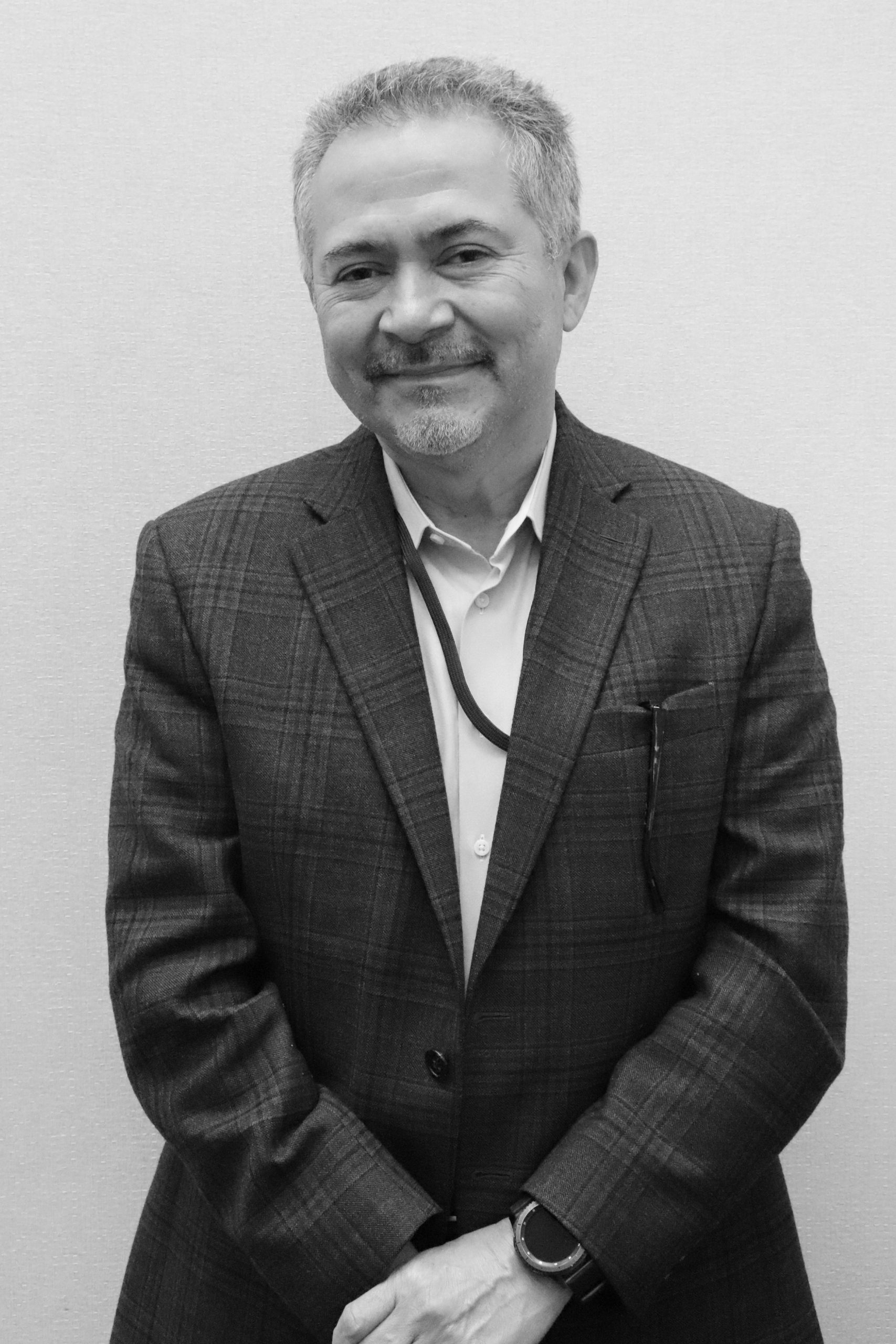 Oscar A. Chacón Executive Director
Oscar A. Chacón is a co‐founder and executive director of Alianza Americas. Before stepping into his current role in 2007, Oscar served in leadership positions at the Chicago‐based Heartland Alliance for Human Needs and Human Rights, the Northern California Coalition for Immigrant and Refugee Rights, the Boston‐based Centro Presente, and several other community-based and international development organizations. Oscar has also served on multiple advisory committees to national and international processes including the Civil Society Consultation process associated with the Global Forum on Migration and Development and the World Social Forum on Migration. Oscar is a frequent national and international spokesperson on transnationalism, economic justice, the link between migration and development, migrant’s integration processes, human mobility, migration policies, racism and xenophobia; and U.S. Latino community issues. 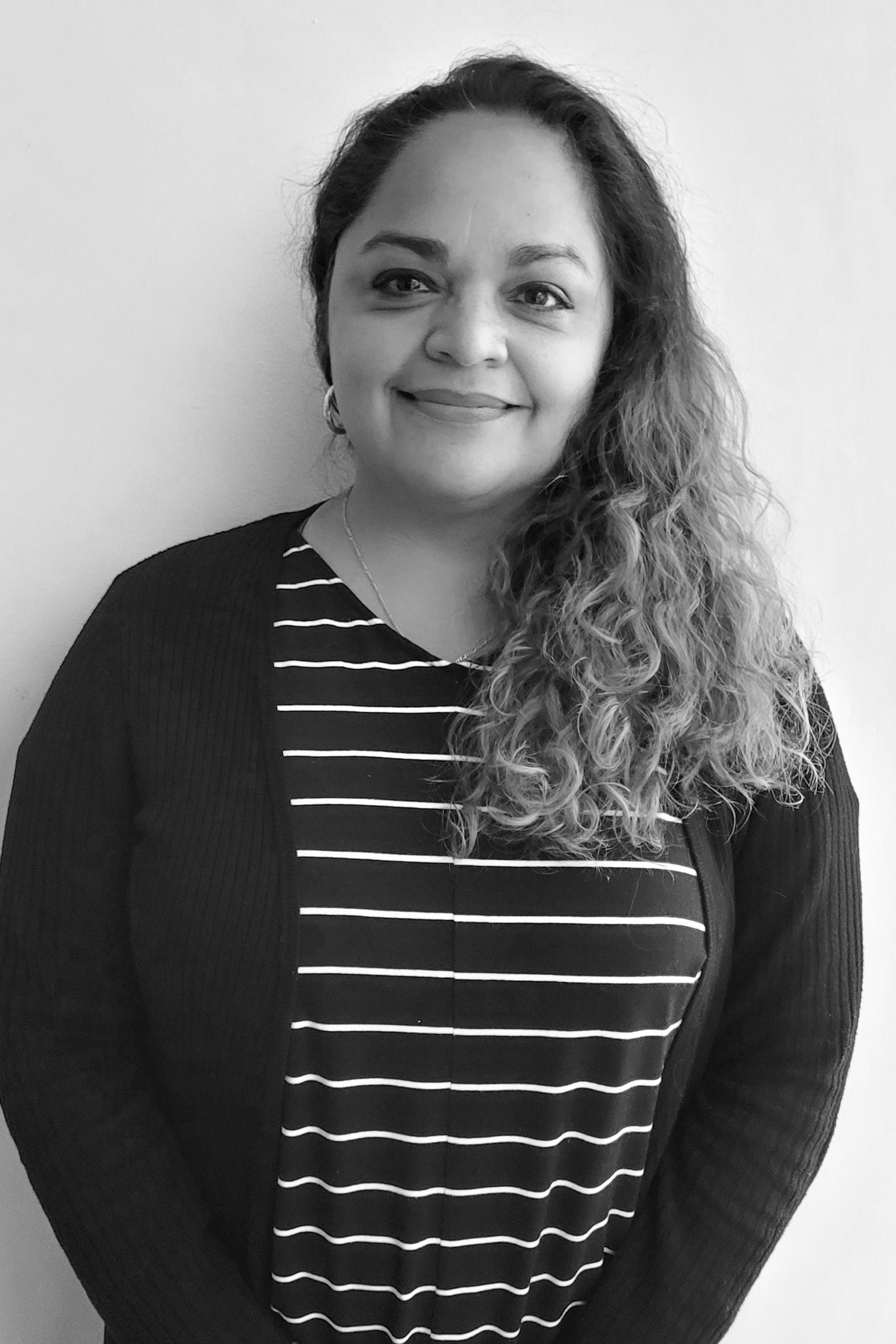 Zorayda Ávila Leadership and capacity building manager
Zorayda Ávila is originally from Zacapu, Michoacan, and now lives in Chicago. She holds an undergraduate degree in psychology from Morelia University and a certificate in sexual education from the Mexican Institute of Sexology in Mexico City, as well as a graduate degree in citizen integration politics from the University of Valencia. Before joining Alianza Americas, Zory served as executive director of Casa Michoacan, a cultural and educational center in Chicago. She is a board member of the Network of Mexican Leaders and Organizations and a member of the Transnational Women's Collective (Colectivo de Mujeres Trasnacionales). Zory's focus areas are in mental health and human rights, with a particular focus on building women’s leadership and strengthening the capacity of immigrant women as community leaders. 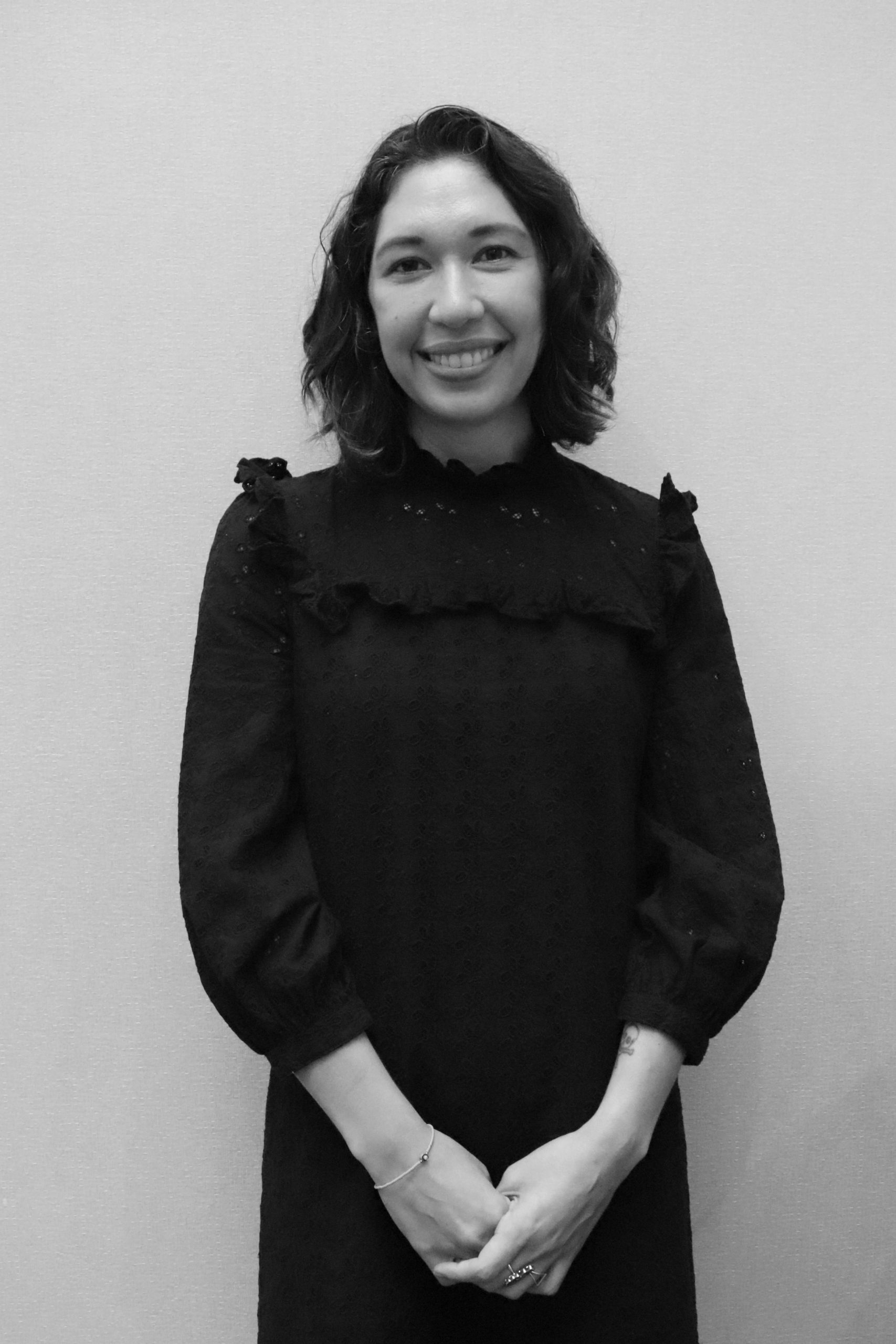 Nancy Treviño Associate Director for Network Power
Nancy Treviño is a community organizer, trainer, and campaign strategist from Miami, Florida. She is the Associate Director for Network Power at Alianza Americas. Prior to her role at Alianza Americas, Nancy worked alongside dozens of grassroots community organizations across the U.S., collaborated with national and international human rights organizations, and continues providing strategic organizing, digital, and communications support to advance social justice movements. She has trained dozens of activists across the country, won multiple local and national human rights campaigns, and is a contributor to the book, “Turnout! Mobilizing Voters in an Emergency.” 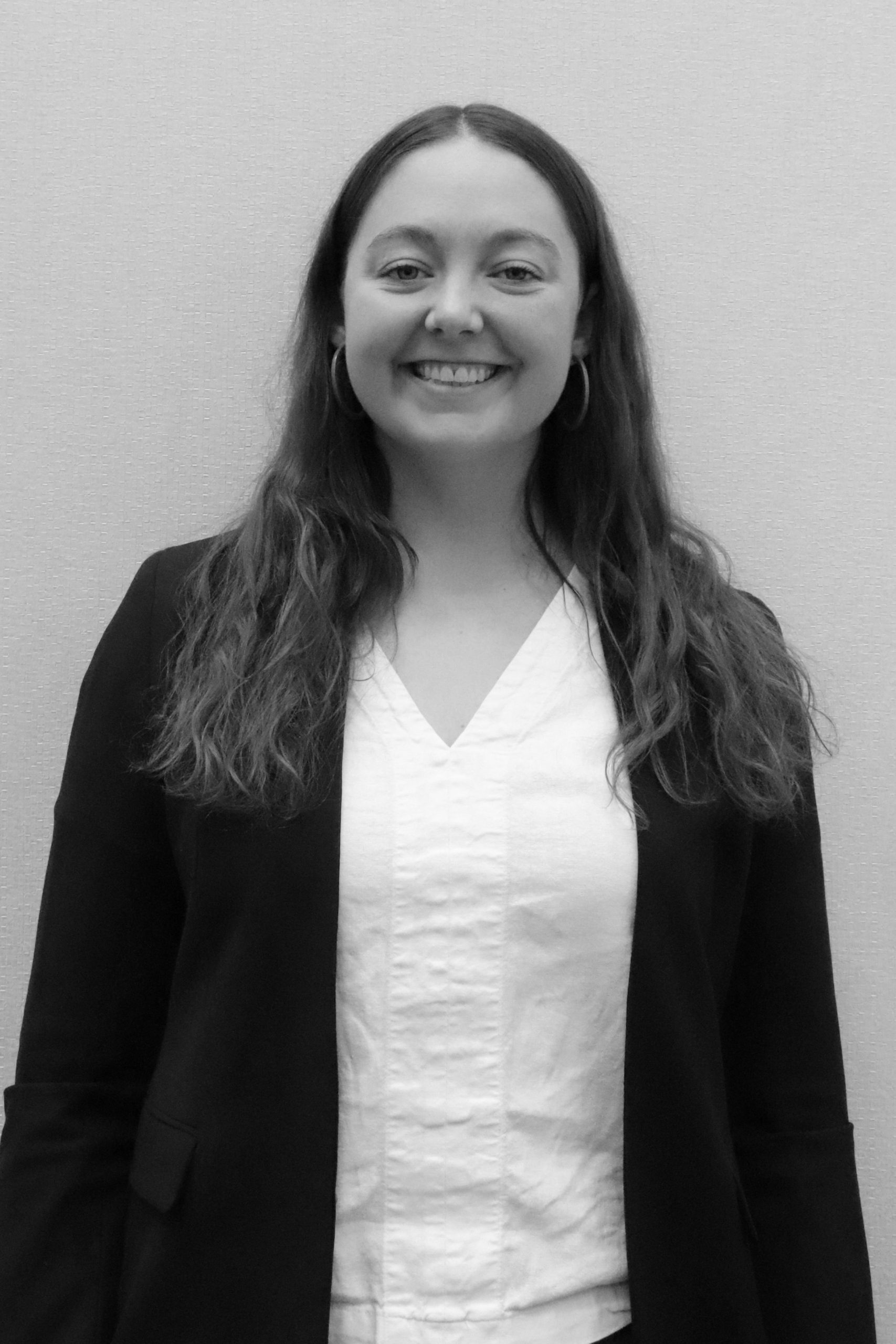 Sarah Rosland Membership Organizer
Based in Chicago, IL, Sarah is a transnational social worker with a desire to promote humane migration policies throughout the Americas through strategic organizing and building collective power. Sarah received her Bachelor’s degree in Social Work from Creighton University and now holds a graduate degree in Social Service Administration from the University of Chicago Crown Family School of Social Work, Policy, and Practice with a specialization in Global Social Development and a Graduate Certificate in Latin American and Caribbean studies. Sarah spent two years living and working throughout Latin America promoting human rights and now serves as Alianza America’s Membership Organizer. In this role, she supports member organizations through grassroots and digital organizing, capacity building, and legislative advocacy. 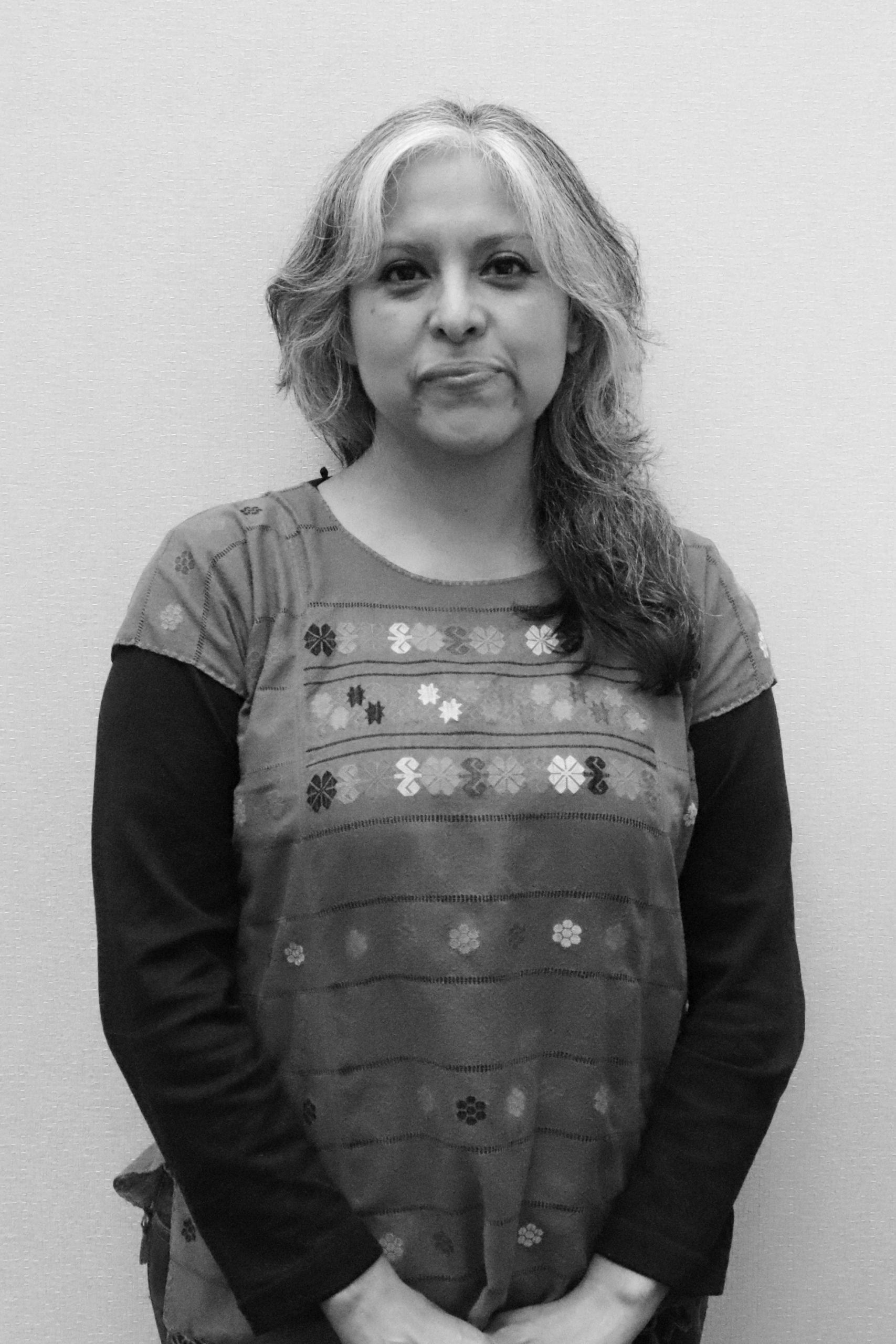 Rita Robles Coordinator in Mexico
Rita Marcela Robles lives in Mexico City and joined the Alianza Americas team in October 2021. She has a law degree from the Autonomous University of Mexico (UNAM) with a specialty in international migration from the Colegio de la Frontera Norte. She also completed a master's degree in Defense and Promotion of Human Rights at the Autonomous University of Mexico City and studied critical theory on African issues including children and gender rights. Rita has collaborated in organizational processes with workers who have sought to democratize their unions in Mexico, has participated with groups in defense of the land and territory and over the last ten years, she has been dedicated to the defense and promotion of human rights of migrants, asylum seekers, and refugees. 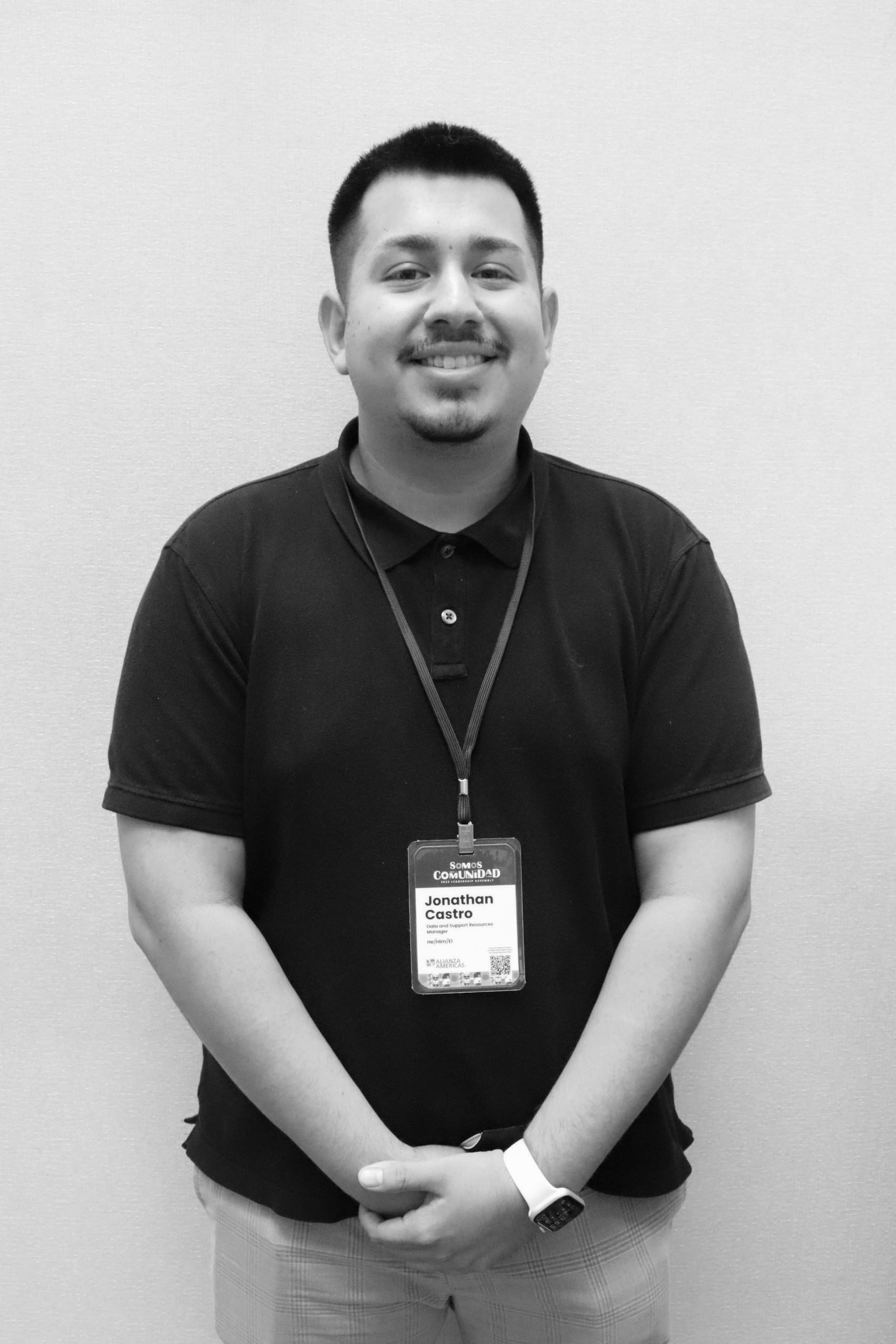 Jonathan Castro Data and Support Resources Manager
Based in Chicago, IL, Jonathan joined the Alianza Americas team in November of 2021 as the Data and Support Resources Manager for the Somos Salud project. In this role, Jonathan helps manage, process, report and analyze data for two federally funded projects. Jonathan has previously worked on a campaign promoting a series of immigrant rights legislations and as a teaching assistant at the University of Illinois at Chicago, where he obtained both a Bachelor’s and Master’s degree in Latin American and Latino Studies. Jonathan hopes to use his deep understanding of Latin American and Latino history and his commitment to humane policy to help carry out Alianza Americas mission and help the Somos Salud project address health disparities in the Latino community. 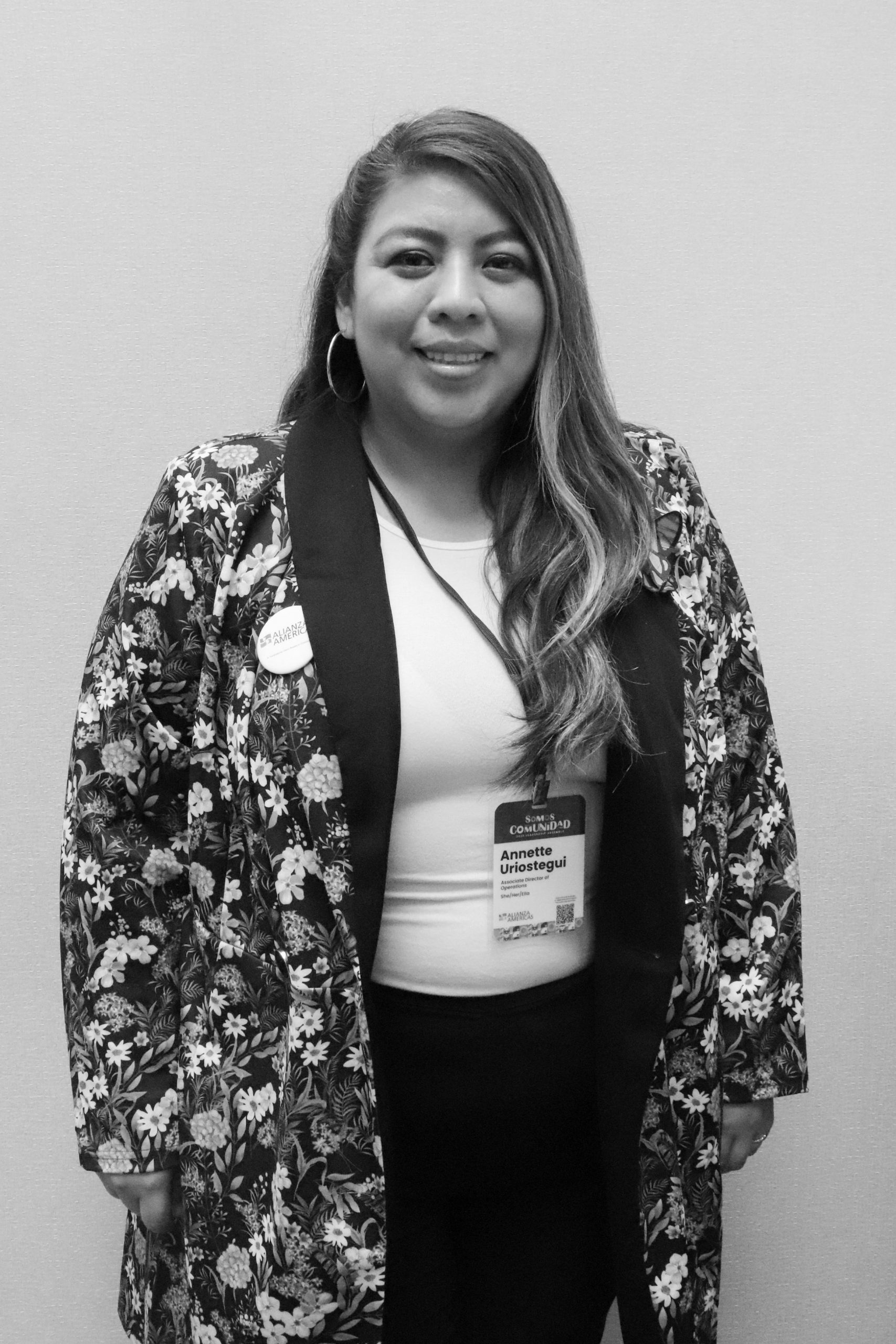 Annette Uriostegui serves as Alianza America’s associate director of operations. In this role, Annette seeks to give administrative support to her team while finding innovative ways to sustain and maximize organizational capacity. Before joining Alianza Americas in June 2020, Annette’s leadership and organizational management come from managing legal offices and community-based non-profit organizations both in her hometown of Melrose Park and Chicago. After being enlisted in the Army National Guard for 8 years, Annette received a Bachelors in Gender and Women Studies from the University of Illinois at Chicago. As someone whose family has been impacted by the broken immigration system in the United States, her personal experience as a Mexican-American daughter of immigrant parents is what has always rooted her work in social justice and advocacy with an emphasis on human and immigrant rights. 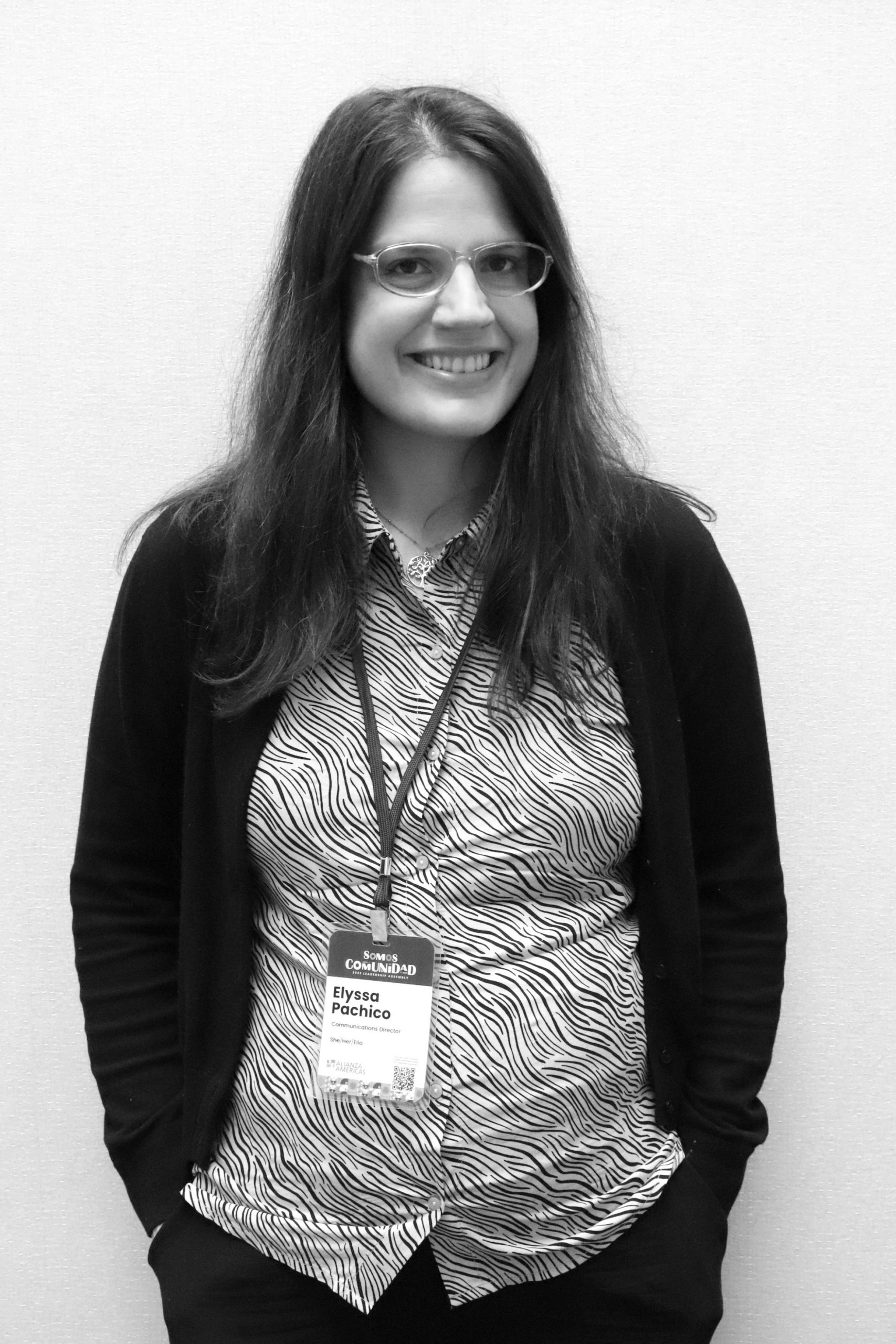 Throughout her career, she has specialized in helping mission-driven organizations expand their impact through innovative and results-oriented communications strategies. Prior to joining Alianza, she supported and led communications at the Washington Office at Latin America. She has also led programs at the International Center for Journalists and InSight Crime. She has an MA in journalism from America University. She grew up in Cali, Colombia, and is currently based in Medellín. 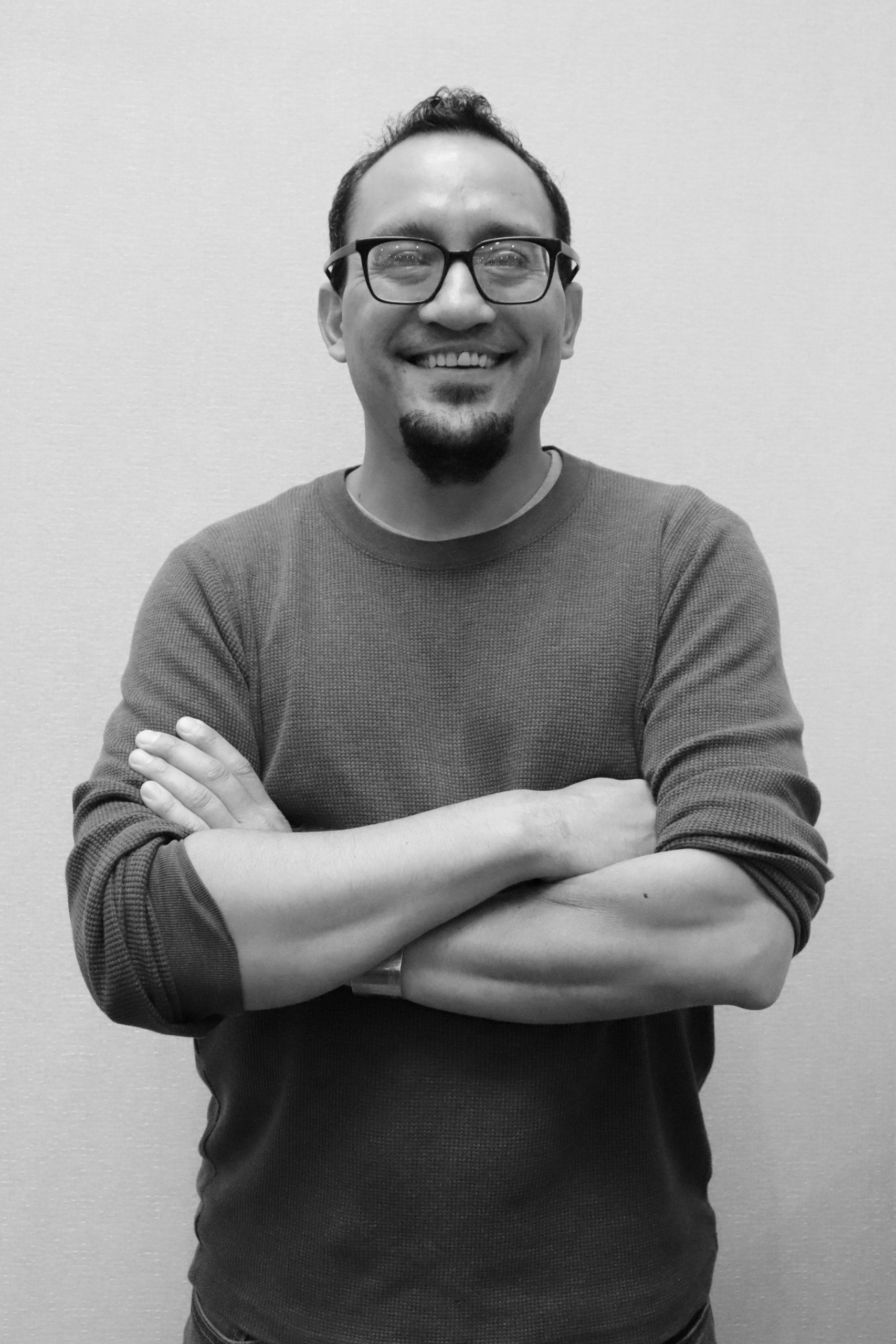 Matt Nelson Director of Presente and Associate Director for Digital Impact
Matt Nelson is the Colombian-born, Midwestern-raised Director of Presente.org (now part of Alianza Americas) and the Associate Director for Digital Impact at Alianza. Prior to his work at Presente and Alianza, Matt served as the Organizing Director at Color Of Change. He has co-founded several cooperative enterprises in multiple Midwestern cities, including a Pizzeria in Milwaukee's Southside. He is a long-serving community organizer and campaign strategist who was featured in the first major book on the Ferguson Uprising, “Ferguson is America: Roots of Rebellion”. He contributed to the book, “Welcome to the Revolution: Universalizing Resistance for Social Justice and Democracy in Perilous Times” as well as, “If We Want to Win: A Latine Vision for a New American Democracy” and is an editor of, “Turnout! Mobilizing Voters in an Emergency” (Routledge 2020), EmergencyElection.org. He is finishing a new book on how Latinx organizing and cultural power is reshaping U.S. politics (Routledge 2022). 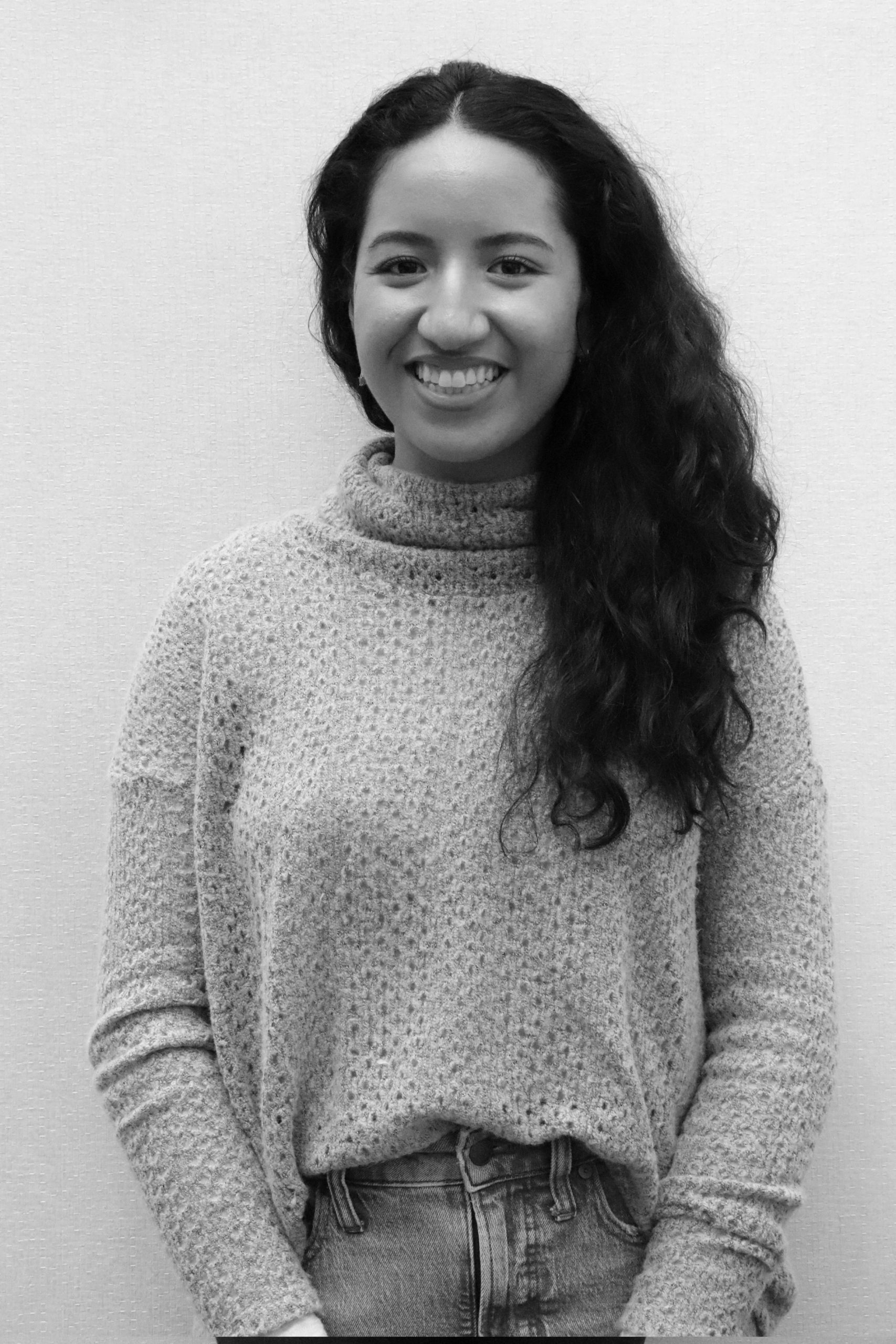 Melanie Minuche Climate Justice Organizer
Melanie Minuche joined Alianza Americas as the organization’s Climate Justice Organizer in November 2021. In this role, she is helping develop and drive the organization’s climate justice agenda through a transnational, migration, and racial justice lens. Before joining Alianza America, Melanie worked with asylum-seeking unaccompanied migrant youth from West Africa, Central America, and Southeast Asia, many of whom were fleeing gender-based violence, political persecution, and climate displacement. Melanie graduated from Loyola University of Chicago with a Bachelor’s degree in Social Work and a minor in Communication/Advocacy and Social Change studies. As a daughter of Ecuadorian immigrants, Melanie’s passion for advancing human mobility and migration rights stems from envisioning a world free of borders and rooted in community. 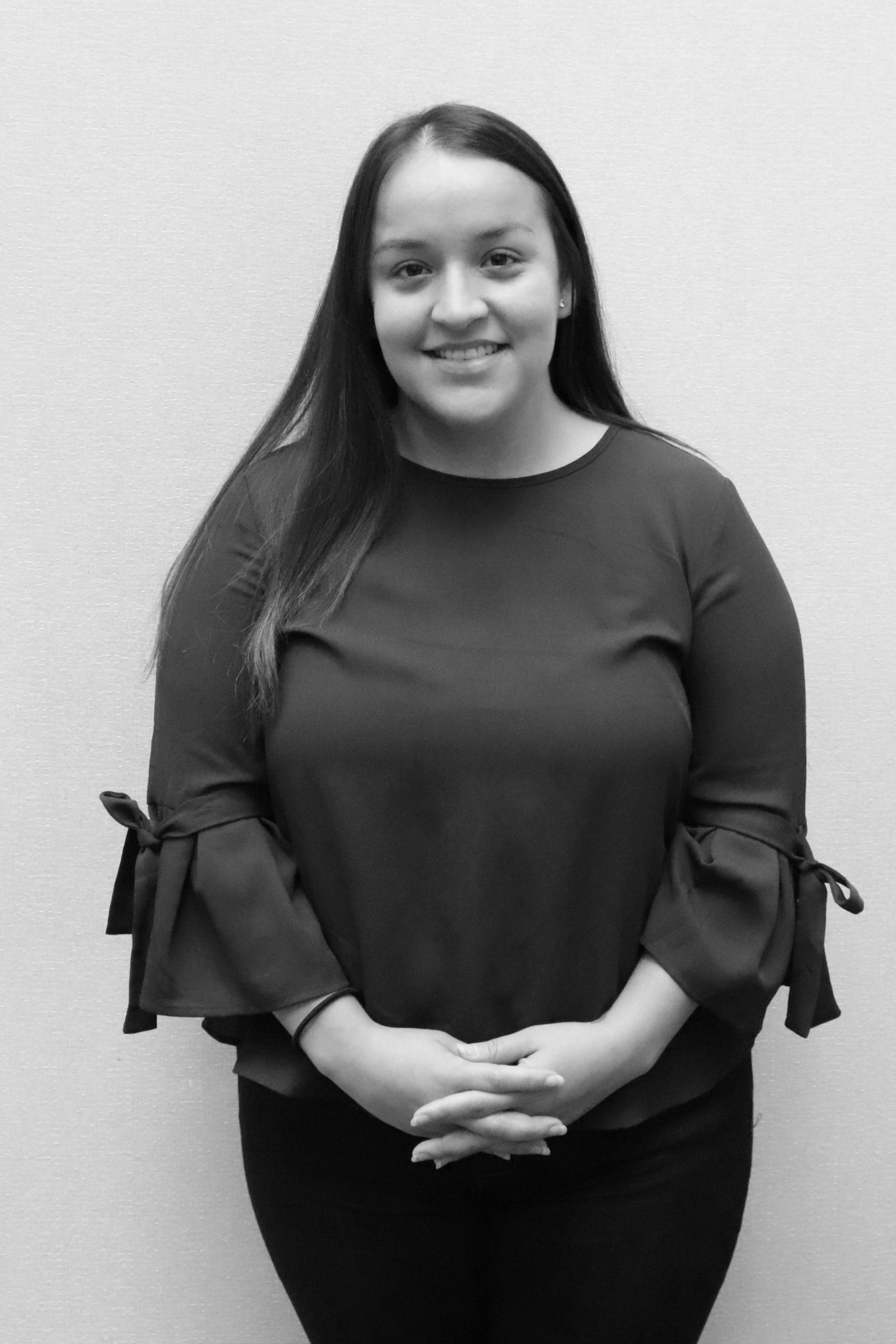 Dulce Dominguez Associate Director for Strategy and Development
Dulce Dominguez is originally from Ixtapan de la Sal, Mexico, and immigrated with her family to the United States at the age of 2 years old. Dulce is now a DACA recipient and has worked in the Lake County, Illinois community as an advocate for immigrant families. She is a co-founder for a grassroots initiative in Northern Illinois known as the Center for Immigrant Progress, working to engage Latino and Immigrant Youth to gain leadership skills and advocate for immigrant rights. She first joined Alianza Americas in 2018 as part of her graduate internship in policy and research, where she spearheaded two research projects focused on the health and safety of outdoor immigrant workers. Dulce obtained a Bachelor’s degree in Social Work from Northeastern Illinois University and a Master's Degree in Social Service Administration from the University of Chicago. As the associate director for strategy and development, Dulce is charged with leading the organization’s institutional support and partnerships to continue growing Alianza’s impact. 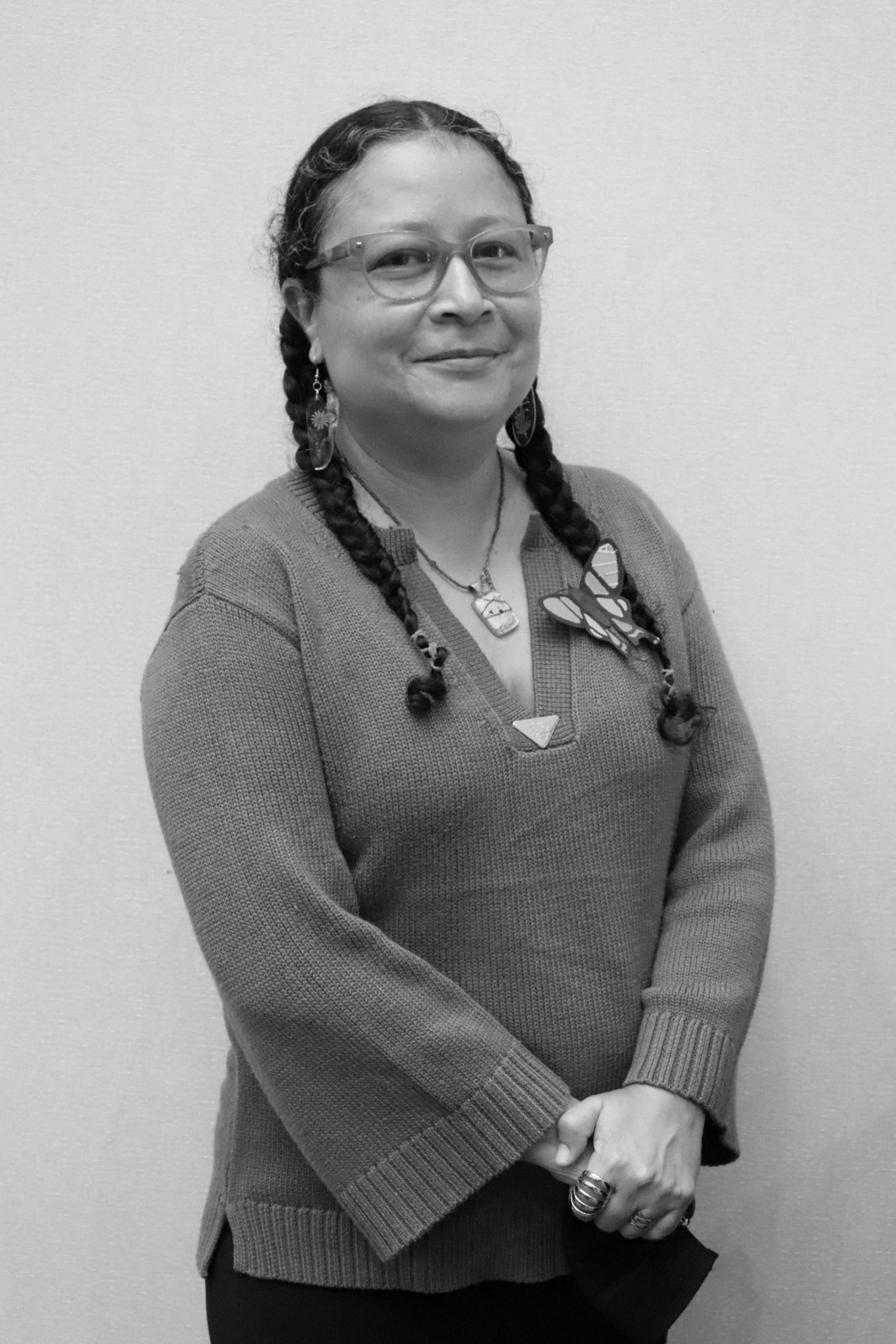 Yanira Arias National Campaigns Manager
Yanira Arias joined the Alianza Americas team in August 2014 to coordinate the network’s response to the detention and stigmatization of thousands of Central American children and their families at the U.S. southern border. In December of that same year, she became Alianza Americas' new national campaigns manager. A native of El Salvador, she brings more than a decade of experience in the field of public health, with special expertise in community mobilization and participation, community organizing, and capacity building to address health disparities and social justice issues. From 2003 to 2012 Yanira was part of the Latino Commission on AIDS in New York, where she served as Director of Community Organizing for the Latinos in the Deep South. In that role, she led the development and implementation of the Dennis deLeon Sustainable Leadership Institute for emerging leaders in Alabama, Georgia, Louisiana, Mississippi, North Carolina, South Carolina, and Tennessee. Yanira graduated from the University of El Salvador in 1996 with a degree in journalism. 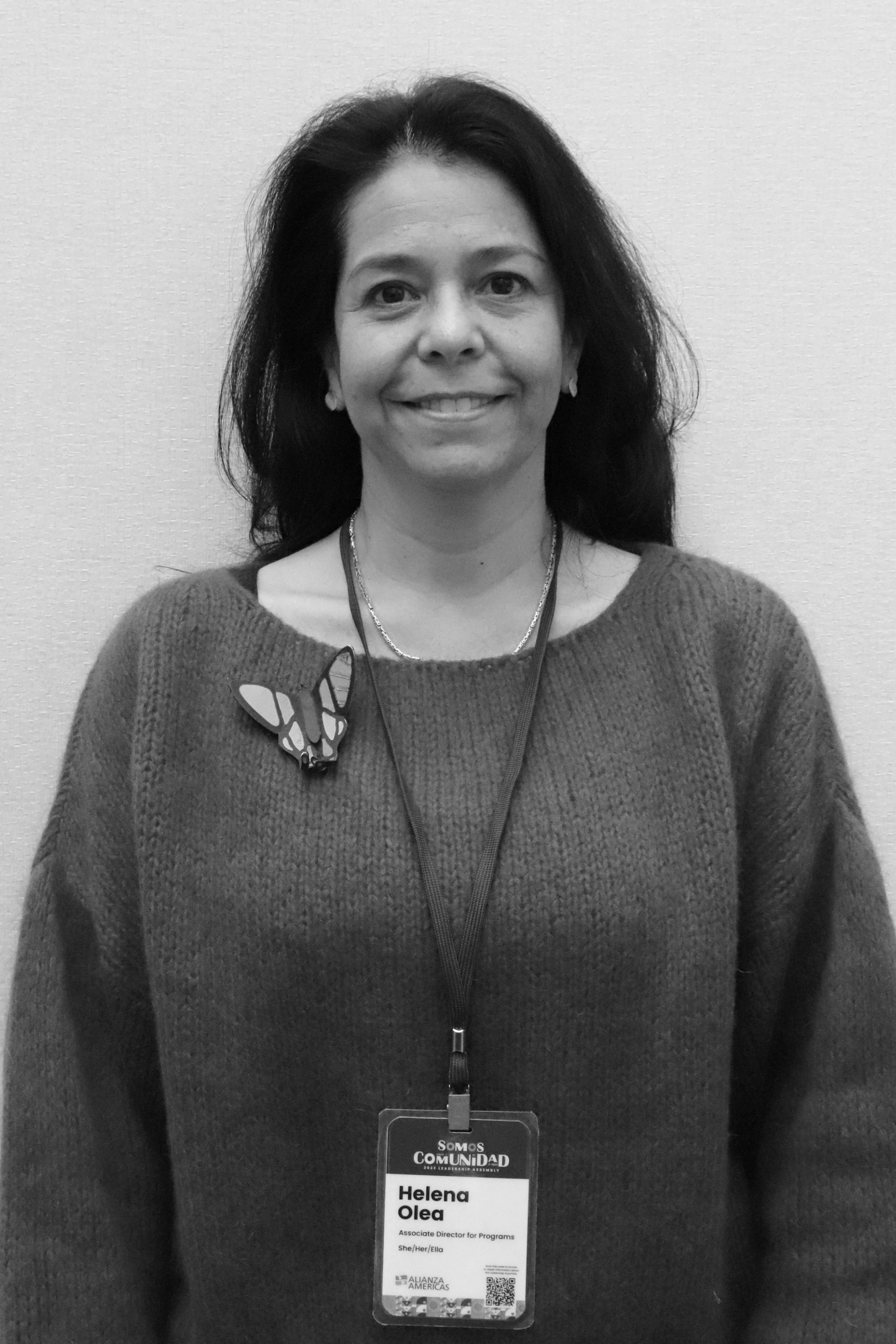 Helena Olea ASSOCIATE DIRECTOR FOR PROGRAMS
Helena Olea currently serves as associate director for programs at Alianza Americas. She is an international human rights lawyer with advocacy and litigation experience before intergovernmental bodies and governmental agencies. Helena is an attorney authorized to practice law in Colombia, with an L.L.M. from the University of Notre Dame. She has over 12 years of teaching and research experience on human rights, migration, refugees, and gender. She has also worked for non-governmental organizations in Colombia and Chile. Helena has dedicated her professional life to the human rights of migrants, refugees, internally displaced persons, and women, combining advocacy and academia. 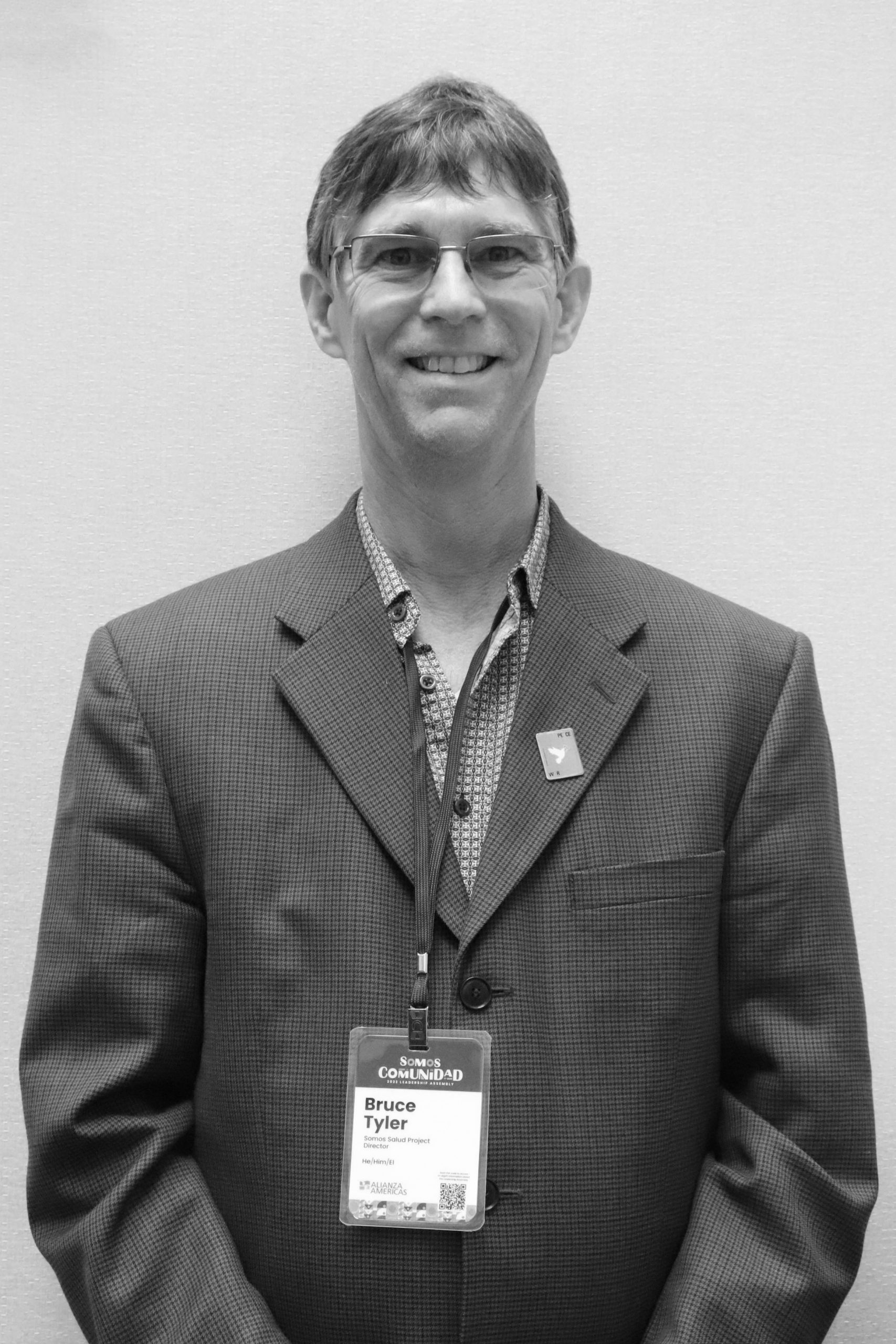 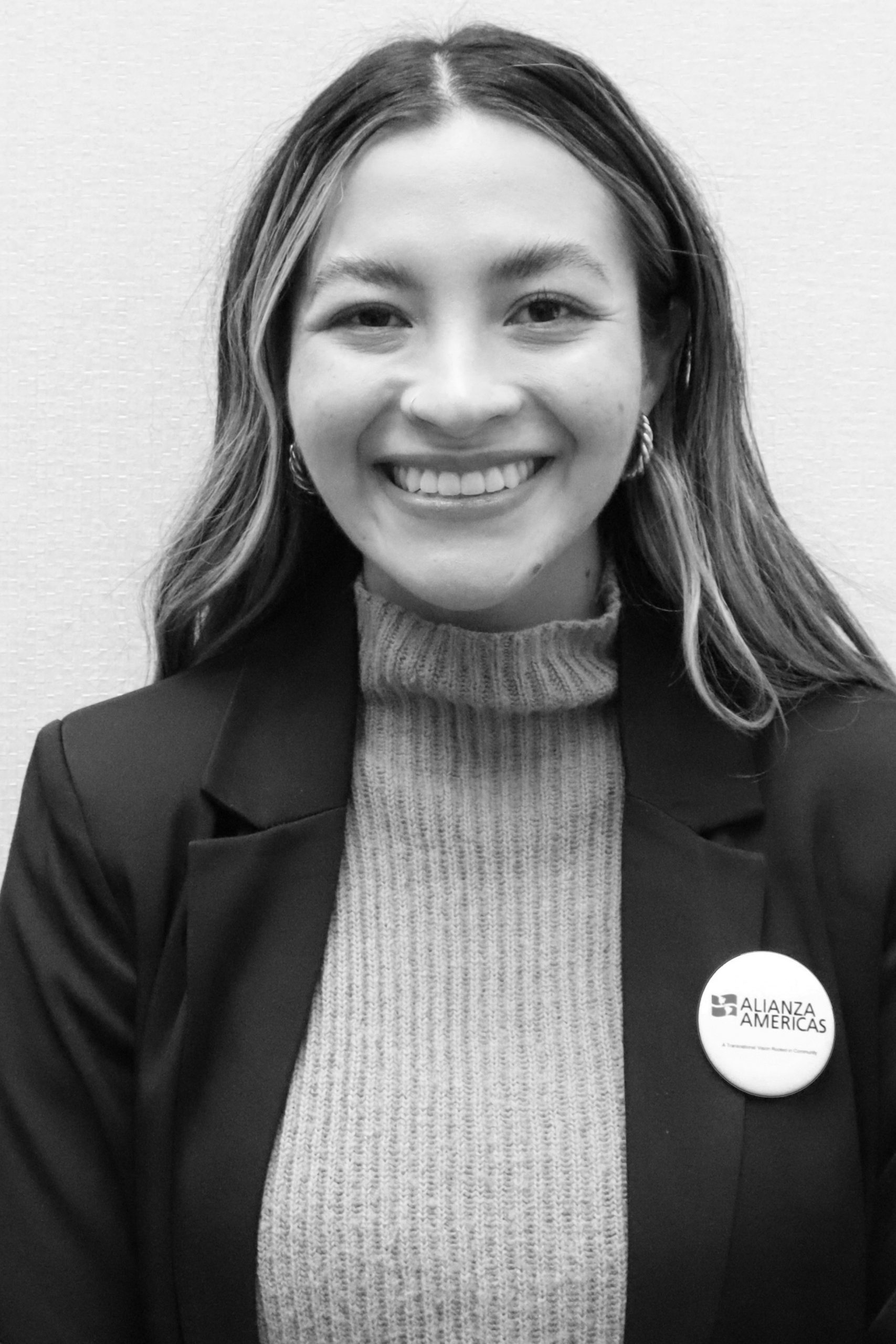 Ximena Leyte Escalante Individual Donor Engagement Manager
Ximena Leyte Escalante is originally from Cuernavaca, Morelos, Mexico and immigrated to the United States with her mother when she was eight years old. She holds a Bachelor of Arts in Sociology and a Bachelor of Science in Journalism from the University of Colorado Boulder and a Master of Arts in Social Service Administration from the University of Chicago’s Crown Family School of Social Work, Policy, and Practice. Ximena first joined Alianza Americas in 2019 as part of her graduate internship in social policy and research. She later joined the team as a development consultant in August of 2021, before transitioning into her current role. Ximena supports the management of Alianza’s development efforts by writing and coordinating grants, strategizing individual fundraising, and helping manage the organization’s institutional support and partnerships. Above all, Ximena values working in community with people and is passionate about helping advance the fight for social equity and justice for migrant communities across the Americas. 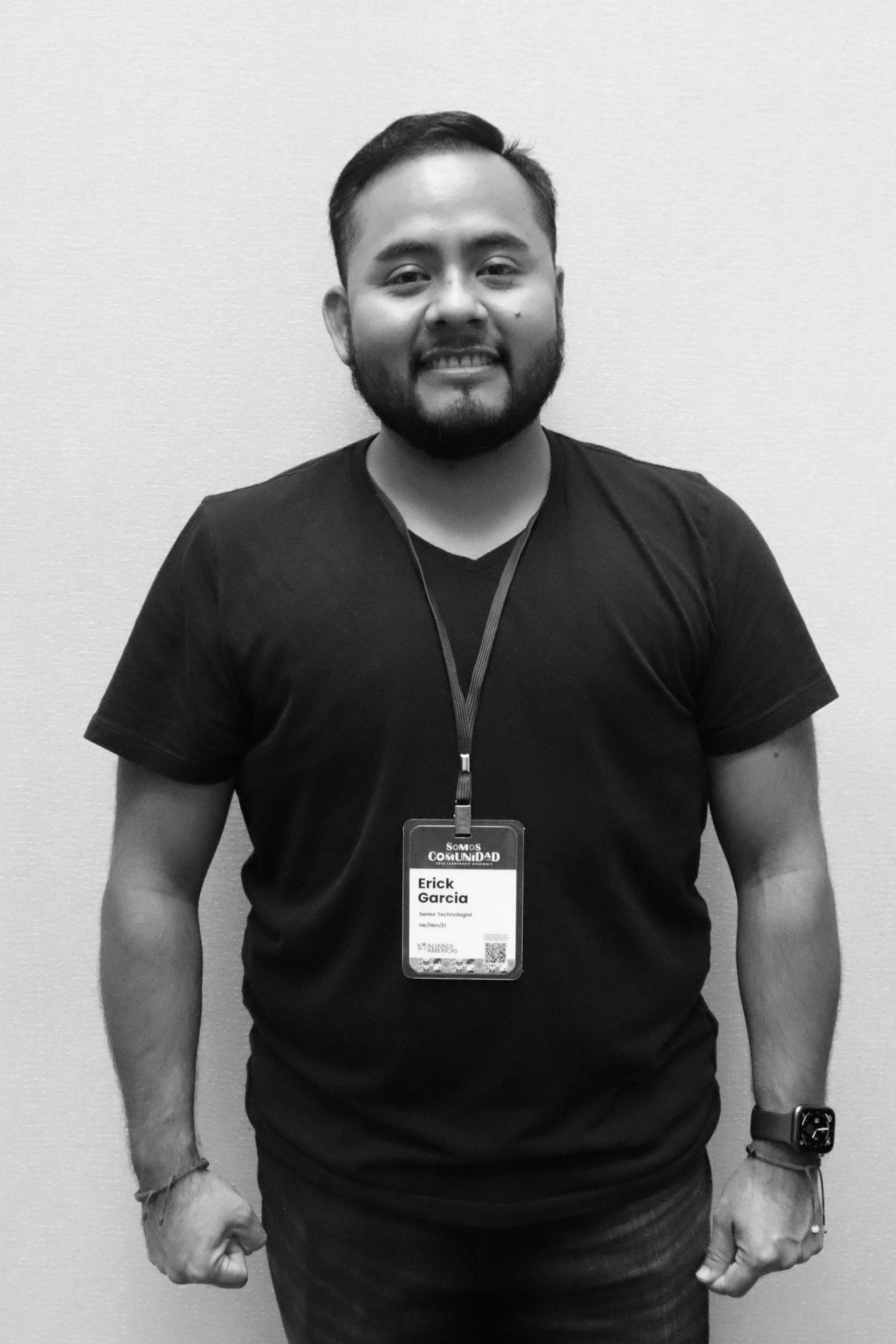 Erick García Senior Technologist
Erick Garcia serves as Alianza Americas and Presente.org’s Senior Technologist. He is originally from Veracruz, Mexico and migrated to the United States at 11 years old. He graduated from Arizona State University with a Bachelors in Computer Science in 2011. After becoming DACAmented in 2012 he chose to continue powering up and growing the Latinx online organizing community because he believes that significant social change can only happen with our communities at the forefront who have the potential to overcome adversities. He was selected as one of the Voqal 2019 fellows to pursue his #GameTheSystem project, which sought to be a first of its kind, web-based, mobile-ready gamified action dashboard for grassroots organizing that leverages existing interactive organizing platforms and utilizes mobile technology, texting, email and social media. As the Senior Technologist for both Alianza Americas and its digital organizing powerhouse, Presente.org, he is helping upgrade digital and translocal organizing infrastructure, aimed at engaging and building leadership and participation of Latinx and immigrant communities.